Visitors from the Diocese of Leicester in England

May 24-26 We had visitors from the church of England. They were visiting various churches and their programs all around Japan. One of their final stops was the Let Us Walk Together Project. We were so thankful to have them! They have been a huge source of support for the project over the last two years.

After they arrived in Sendai Friday night we had dinner with the members of the Standing Committee and the staff. Throughout dinner introductions were given as well have thanksgivings for the various people in the room for all the work that they have done. Our visitors were impressed with the cute obentos (lunch boxes)  that our food came in.

The next day the we all attended the Let Us Walk Together Project's Thanksgiving Mass. After the service we had enough time for the group to talk with the various parish members and service attendees. Then we went to Shinchi. At the Shinchi Base we were told the history of the area and more specifically the history of the church. We also watched videos of the tsunami coming in on March 11, 2011. 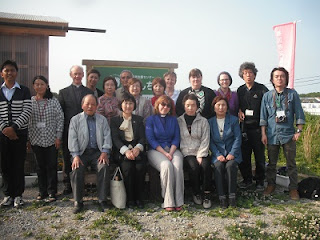 After hearing various personal accounts of the tsunami we visited a few devastated sites. Mr. Tsuyoshi Miyaku who lost everything in the disaster joined us. It was the first time that he had been to the coast since that terrible day. We went where the video that we saw at the base was taken and then a temporary housing. At the temporary housing we were able to talk to Mr. Nobuyuki Miyake about the current state of the residents in Shinchi. It was Mr. Miyke's duty, on the day of the disaster, to go around warning everyone that a tsunami was coming. Because he was warning others of the dangers to come he was unable to save his mother in time. He shared with the group from Leicester the realities of the radiation problems and the stress of those living in temporary housing. It was eye-opening for the group.

Once we finished asking him everything we could think of we went on to Fuji kindergarten. On March 11, 13 members of this kindergarten were lost. Three of were teachers and 9 were kids. The building is no longer used. They have been able to rebuild a new facility but the tragedy of that day still haunts them. 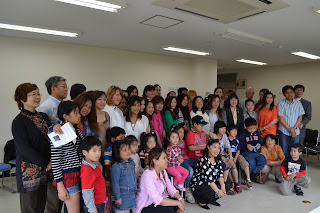 On Sunday the group went to Sendai Christ Church for morning mass. After a quick lunch they presided over a mass for the Filipino women the project has been working with. Every family present received a hand-crocheted cross made by parishioners of the Diocese of Leicester. After the service the Filipinas present were able to share some of their stories with the group from Leicester.

We were so glad that this group was able to visit. 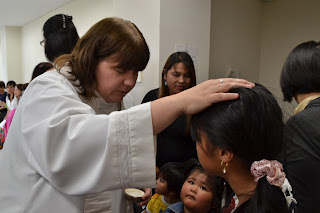 Posted by Katie Young at 1:46 AM No comments: 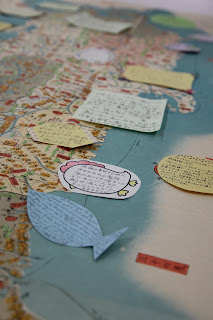 Some of the staffers and members of the Standing Committee  wrote prayers for the numerous programs the project has been involved in over the past 2 years. During the service many of the prayers were said aloud and then placed on a map of the Tohoku Region. It was very beautiful. It gave us all time to think about all that we have been apart of and all that lies ahead. This past weekend we also had visitors for the Diocese of Leicester in England. One of the priests offered up her own prayers for the project as well.

It was a very nice service and it great to have to have so many people there together celebrating this work. You could tell that God was present in each and everyone of the people there. Thank you to all of you who made this project possible. 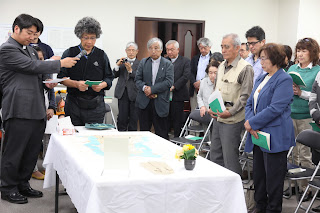 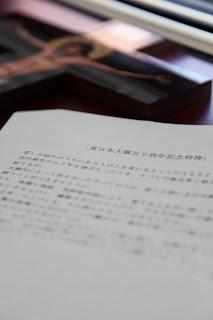 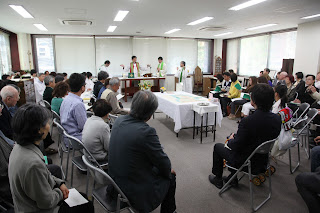 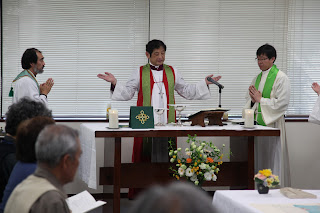 Posted by Katie Young at 7:33 PM No comments: 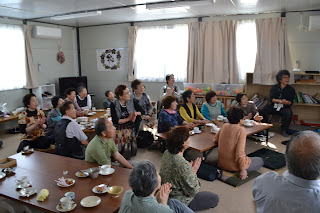 Last Thursday, the Women’s Club of Sendai Christ Church had its monthly visit to Shinchi’s temporary housing complex, Hirotta. Every month, as we have mentioned before, they gather for “hotto corner” or tea time in English. They take delicious cakes, tea, and coffee. This time they also took many donated items for a mini-bazaar.

After enjoying one another’s company over some tea and cakes, we sang some songs. They were fun well known Japanese songs. We enjoyed them so much that encore was requested. Then everyone was invited into the lovely weather outside to partake of the mini-bazaar. Sadly the majority of the clothes were way too small for the residents. We promised them that we would bring bigger sizes next month. One of the women living in this complex said that having these gatherings made living in these tiny units bearable. Thank you to everyone that makes these events possible. 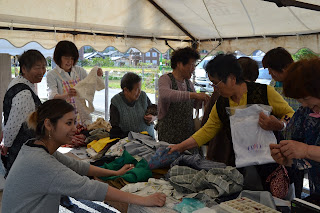 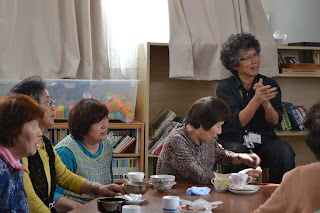 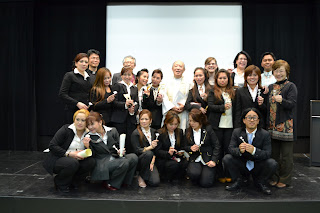 On May 18th we held a Graduation Ceremony and Speech Competition for the Japanese class for the foreign women of Sendai. The event was started with a short prayer service led by Fr. Saito. Then we began the speech competition. Over the past few months we have been preparing for this day. Everyone in the class wrote a speech and then there was a semi-tournament to decide who would take part in the competition on Graduation day. The final four participants did a great job. There was not a dry eye in the house by the time they ended.

Majority of the students were from the Philippines so in between each speech there were a cultural presentations. There were traditional dances, Filipino songs, and a presentation of traditional clothes. After the trophies were handed out to the speech winners, the certificates were given to all the graduates by Bishop Kato and Kei Ikezumi. We then finished the ceremony with a song about the hope for the future. The entire event was a wonderful. Thank you to everyone who supported the project and made this day possible. 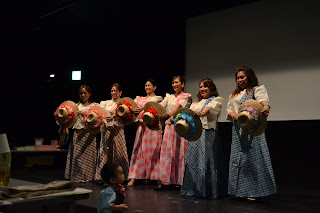 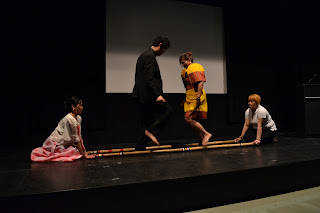 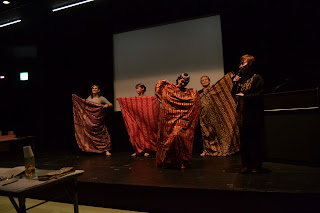 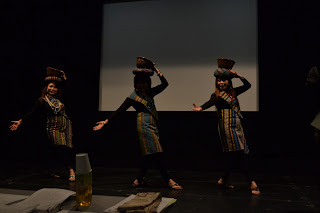 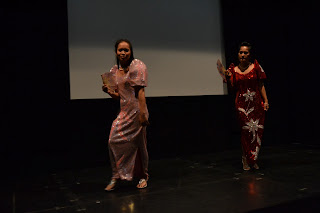 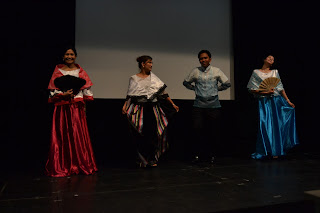 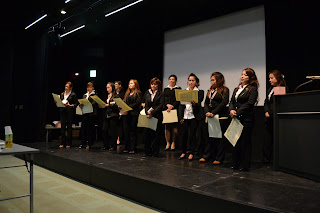 Activities at Shinchi Base


At Shinchi Base recently hosted several screenings of the movie Otokoha Tsurai at various temporary housings. This is an old but famous movie in Japan. They were great events full of tears and laughter. 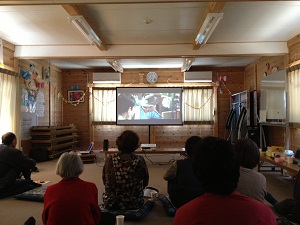 They also have been tending the flower beds around the base. There are so many Tulips blooming now! Some volunteers along with the staff  also planted new flowers for the Spring. 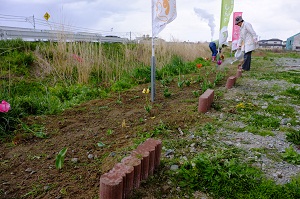 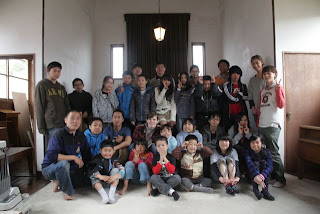 Murone Land is this magic place right outside of Murone city. There, there is a very small church that could possibly hold 20 people for a church service. But during Golden week this tiny church in the country turned into a camp for children who has a foreign parent. Using 4 cars we took 22 kids and 8 adults out there last Friday.

Once everyone arrived we had a prayer service and then headed to an onsen. After the onsen we had prepared barbecue for dinner.  These kids can eat! We nearly didn’t have enough. It was very cold out there so we had the kids warm up in the church before we set off fireworks. It is truly amazing how entertaining fireworks are. After warming up again we went for a night walk and star gazing. Two of the staff members had decorated one of the cars with lights. They also had put on somewhat scary masks. The older kids thought it was cool while the younger ones were pretty scared.

The next morning we had a morning prayer service and then breakfast. Then the kids made fruit 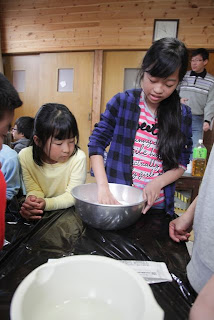 jello to take home to their parents. Everyone was assigned a job such as cutting the fruit, making shiratama (sweet rice flour dumplings) and preparing the jello. While the kids were making jello the male staff members prepared the grill to make yakisoba and BBQ the rest of the leftover meat from dinner. During lunch, again we shown how much the kids could eat. It was entertaining to see.

We then had one last prayer service. One of the staff members was a priest, Fr. Lee. As I mentioned before all of the kids at this camp were half Japanese which can be difficult sometimes. During the last prayer service Fr. Lee gave a talk about how none of us are alone. Though we might only be one person and we think that there are problems that no one else understands, that is not the case. We have each other. We have God. We can and should navigate this life together. We should walk together through this life, supporting one another.

Once we cleaned up the church, and packed all of our belongings we headed back to Sendai. The two-day camp in Murone Land was a success. 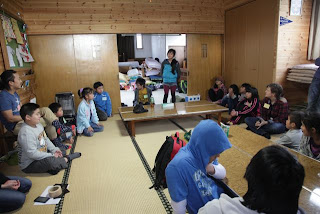 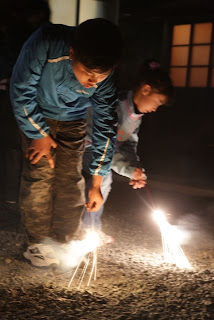 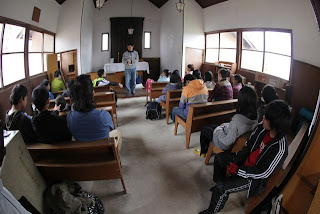 Posted by Katie Young at 6:36 PM No comments: